Union Pacific Railroad will begin the final phase of the momentous move of Big Boy No. 4014 to Union Pacific's Heritage Fleet Steam Operations headquarters in Cheyenne, Wyo., on Monday, April 28 at 8 a.m. PDT. The 1.2 million pound steam locomotive will be towed 1,293 miles by modern diesel-electric Union Pacific freight locomotives from the Union Pacific rail yard in Colton, Calif., to Cheyenne, Wyo., for restoration over the next five years.

"After months of work, Union Pacific begins an excursion eagerly awaited by our employees and rail fans as we launch the ambitious restoration of this historic steam locomotive," said Ed Dickens, senior manager of Union Pacific Heritage Operations. "Thousands have come out to see us in Southern California during the preparation for this move, and we expect thousands more to visit us on the journey to Cheyenne."

Big Boy No. 4014 has drawn the attention of rail enthusiasts and media around the world while Union Pacific has been preparing for the trip to Cheyenne over the last six months. This giant among steam locomotives will be on public display in Las Vegas, Salt Lake City and Ogden, Utah, during the 11-day excursion to Cheyenne. The detailed schedule is available at www.upsteam.com.

Following a 17-year operating career, Union Pacific delivered No. 4014 to RailGiants Train Museum in January 1962. No. 4014 was one of 25 Big Boys built for Union Pacific and was used primarily for freight service on the transcontinental railroad route beginning in 1941. Union Pacific plans to restore the locomotive to operating condition.

Union Pacific Railroad is the principal operating company of Union Pacific Corporation (NYSE: UNP). One of America's most recognized companies, Union Pacific Railroad connects 23 states in the western two-thirds of the country by rail, providing a critical link in the global supply chain. From 2007-2013, Union Pacific invested more than $21.6 billion in its network and operations to support America's transportation infrastructure. The railroad's diversified business mix includes Agricultural Products, Automotive, Chemicals, Coal, Industrial Products and Intermodal. Union Pacific serves many of the fastest-growing U.S. population centers, operates from all major West Coast and Gulf Coast ports to eastern gateways, connects with Canada's rail systems and is the only railroad serving all six major Mexico gateways. Union Pacific provides value to its roughly 10,000 customers by delivering products in a safe, reliable, fuel-efficient and environmentally responsible manner. 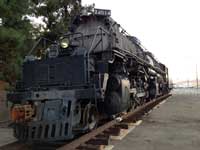 Union Pacific locomotive No. 4014, at the L.A. County Fairgrounds in Pomona, Calif. More photos available in the No. 4014 Media Kit.