Union Pacific Railroad today announced that Big Boy No. 4014 has commenced the second phase of its journey to Union Pacific's Heritage Fleet Operations headquarters in Cheyenne, Wyo., from Fairplex, home of the L.A. County Fairgrounds in Pomona, Calif. The 1,260-mile trek began with No. 4014 moving across the Fairgrounds parking lot on temporary track installed specifically for the move, to Union Pacific's Colton, Calif., rail yard. It marks No. 4014's first move in more than two decades from its home at the RailGiants Train Museum.

"Union Pacific long has played a key role in building America, starting when Abraham Lincoln signed the railroad into existence more than 150 years ago," said Ed Dickens, senior manager - Union Pacific Heritage Operations. "Restoring No. 4014 is a great way for us to honor employees past and present while bringing to life Union Pacific's history for rail fans everywhere."

Final travel preparations will be made in Colton, after which No. 4014 will be moved to Cheyenne. The restoration process is expected to take several years and will involve thousands of hours of work by a team of steam locomotive experts.

Following a 20-year operating career, Union Pacific delivered No. 4014 to the RailGiants museum in January 1962. The locomotive was one of 25 Big Boys built for Union Pacific and was used primarily for freight service on the transcontinental railroad route. The locomotive and tender weigh more than 1.2 million pounds and were delivered to Union Pacific in 1941. The travel schedule for No. 4014 will be published in the coming weeks at www.upsteam.com.

Union Pacific Railroad is the principal operating company of Union Pacific Corporation (NYSE: UNP). One of America's most recognized companies, Union Pacific Railroad links 23 states in the western two-thirds of the country by rail, providing a critical link in the global supply chain. From 2007-2012, Union Pacific invested $18 billion in its network and operations to support America's transportation infrastructure, including a record $3.7 billion in 2012. The railroad's diversified business mix includes Agricultural Products, Automotive, Chemicals, Coal, Industrial Products and Intermodal. Union Pacific serves many of the fastest-growing U.S. population centers, operates from all major West Coast and Gulf Coast ports to eastern gateways, connects with Canada's rail systems and is the only railroad serving all six major Mexico gateways. Union Pacific provides value to its roughly 10,000 customers by delivering products in a safe, reliable, fuel-efficient and environmentally responsible manner. 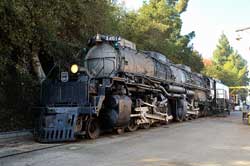